The Dark Dimension Roleplaying with Doctor Who! 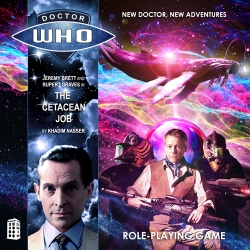 Synopsis: In the remarkable region of space known as the Medusa Cascade, star whales roam free. The Doctor recognizes these gentle beasts as one of the most majestic lifeforms in the universe, a spaceborne cetacean that migrates through the space between the stars. He also recognizes the eggs of these endangered wonders as utterly priceless. So when a platoon of Judoon locks down a Hath starship and announces that just such an egg has been stolen, the Doctor has questions regarding this impossible crime. Just how would one steal the egg of a star whale? And why? The Judoon don’t know how, and they don’t know why, but they’re not the type to waste time asking questions. They’ve already made an arrest and proving the suspect’s guilt is treated as nothing more than a technicality.

After speaking with the accused, the Doctor and Riddell launch an investigation of their own. Aboard this curious aquatic vessel on a mission of cultural exchange, there is no shortage of unusual suspects. The rebellious teenage stowaway from Raxacoricofallapatorius doesn’t trust anyone, and the larger-than-life Adiposean envoy can’t keep his mouth shut. The Hath cultural liaison has her own seemingly ridiculous agenda, and no one is sure if the glowing cube that’s been sent from the Cygnus system is even a lifeform at all. It will take some real detective work to explain the who, the why, and the how of the most astonishing heist in the cosmos!

RIDDELL STOOD agape at the open doors of the TARDIS, gazing out at the vast, colourful clouds of the nebulae arrayed below the time capsule as it hung suspended in space.

“Behold, John, the Medusa Cascade!” announced the Doctor, gleefully, as he joined his friend to take in the unparalleled view.

“It certainly is that, John, it certainly is. Take a moment to appreciate its splendour! There’s so much I still have to show you; it feels like we’re making up for lost time,” the Doctor added, a little ruefully. He snapped himself straight back out of it, though, now taking on a professorial tone. “This place is utterly unique in the entire universe. I’ll have you know that Star Whales come here to raise their young.”

END_OF_DOCUMENT_TOKEN_TO_BE_REPLACED 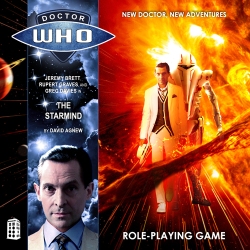 Synopsis: The Starmind is the most advanced artificial sun ever created, a nuclear furnace possessing limitless energy and a brilliant artificial intelligence. The Starmind is powerful, adaptive, intent—and it has gone mad! Aboard a Viyran command ship, the Doctor, Riddell, and Flo learn the incredible history of this marvel of stellar engineering as they desperately attempt to outrun it. Its intentions are ominous and its target is clear, for the rogue sun is on a direct course for the Shadow Proclamation—stronghold of justice, hallowed font of galactic law, and the foremost repository of strategic information regarding countless civilizations.

Upon reaching the Shadow Proclamation’s base of operations in the heart of an asteroid field, the Doctor witnesses a most innovative invasion. A new star takes its place in the heavens and begins its slow takeover of the base’s photonic computer systems using nothing more than the pervasive, relentless power of sunlight. Soon, the unparalleled defences of the galaxy’s greatest law enforcement agency are turned against them, and the resulting chaos leads the Doctor and his companions to uncover inconvenient truths. There is a dark side to the justice of the Shadow Architects, and the Doctor will have to expose their secrets if he hopes to use the dark to overcome the light. 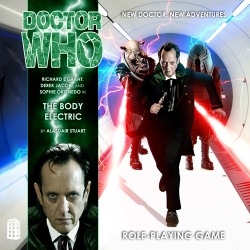 Synopsis: Aboard a crowded prison ship transporting criminals from every corner of the galaxy, the Doctor and Alison are deputized by the Judoon! A mysterious outbreak has infected both the police and their prisoners, and widespread sabotage of the ship’s systems has left the vessel adrift in a sea of meteoroids. The contaminated must be quarantined, but as meteoric debris begins to fracture the hull, time is running out. More bizarrely, the ship’s computer has gone haywire, and efforts to retrieve navigational data or damage reports produce only advertisements for hot dogs and classic television theme tunes. As the Doctor and Alison struggle to come to terms with a peculiar case of cultural contamination amid a shipwide jailbreak, they begin to understand the invasive nature of the hostile force holding them all hostage: the Electroform. 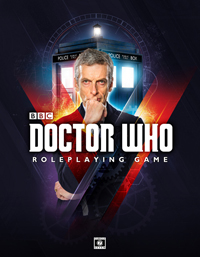 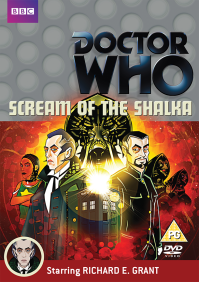